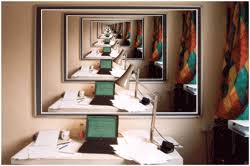 Abstract: In 1934, Skolem introduced nonstandard models of arithmetic; i.e. those models which are not isomorphic to \((\omega,0,1,+,\times,<)\), in which \(\omega\) is the set of natural numbers. However, the flourishing of the subject was in 1970s, when studies on nonstandard models of Peano arithmetic, \({\sf PA}\), got deeper and many striking results were achieved; one of the most important works in this area is Friedman's 1973 result on initial segments and his rediscovering of standard system of a model. Standard systems first appeared in Scott's work (1962) on the family of sets which are known today as Scott's sets.

In particular, Friedman proved: every countable nonstandard model of \({\sf PA}\) carries a proper initial self-embedding; i.e. an isomorphism between \(\mathcal{M}\) and a proper initial segment of \(\mathcal{M}\). There have been many generalizations and refinements of Friedman's Theorem in the recent decades, which have unveiled many characteristics of the structure of countable nonstandard models of arithmetic